UPDATE | Church expected to be structurally OK after steeple collapse 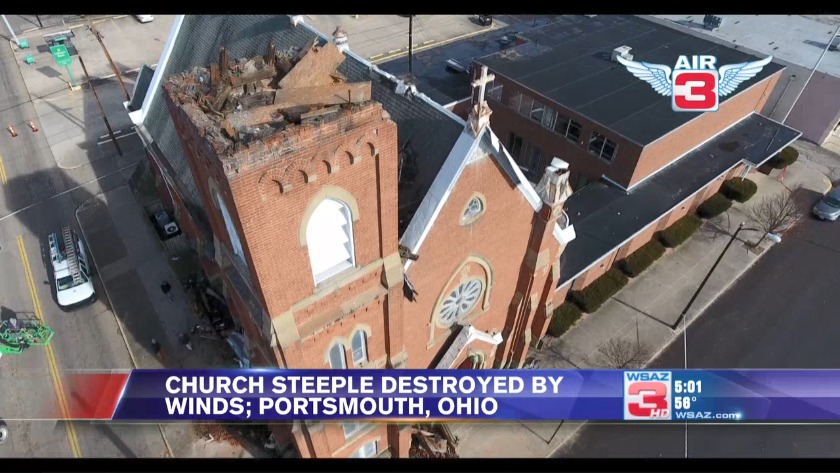 Wind blows over a church steeple in Portsmouth, Ohio 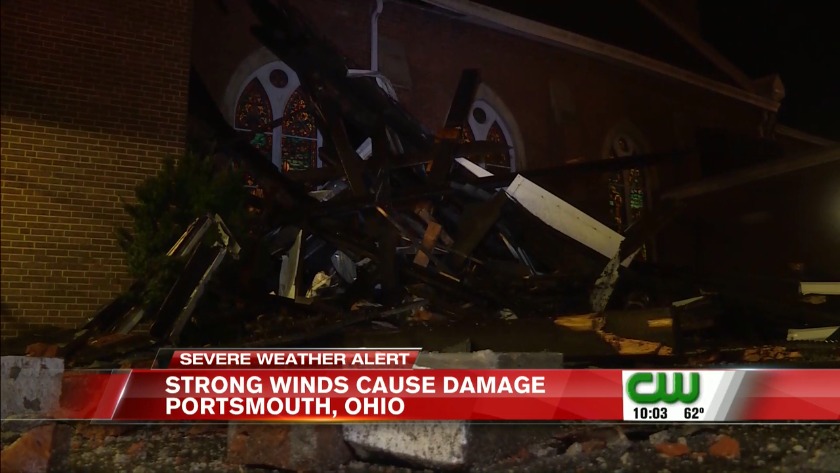 PORTSMOUTH, Ohio (WSAZ) -- UPDATE 1/13/20 @ 8:18 p.m.
A church in Portsmouth that emergency crews told WSAZ was damaged beyond repair, is now expected to be OK after severe winds blew the steeple off Saturday.

The Evangelical United Church of Christ on Washington Street was heavily damaged by severe weather.

The pastor at Evangelical United Church of Christ says inspectors are out surveying the damage, which seems to be to just the steeple and a small section of roof.

"This is an interesting metaphor, I think, for where the church is at," Pastor Josh Lawson said. "We've been in a period of attempting to rebuild the congregation after many years of decline. So now facing this challenge with the physical structure is kind of reflective for what the congregation is going through.”

Lawson says the church, which was built in the 1880s, has minor interior damage. He’s hopeful that services will be able to resume this Sunday.

The church is one of four buildings to sustain damage or collapse over the last month and a half in Portsmouth.

WSAZ is working to get comment from city officials about what they plan to do to protect other buildings in town from meeting similar fates.

Lawson is confident the city will do something to preserve the city’s historic buildings.

“A lot of these buildings are very old,” Lawson said. Buildings from the late 1800s need regular maintenance. Some of them have had that, and some of them haven't, so we just want to make sure we do our diligence to make sure everyone is safe both within and without the congregation.”

The church is collecting donations to help cover repairs that insurance may not cover. To donate,

The Evangelical United Church of Christ on Washington Street was heavily damaged by severe weather.

The steeple was blown off, several bricks fell, and other damage was reported to the roof.

Fire officials tell our crew at the scene there is concern about more winds causing damage, or the church falling down on its own.

WSAZ has a crew at the scene.

Portsmouth Police tell WSAZ they are responding to two scenes where buildings have been damaged.

We are told crews are at a church on Washington Street and 4th Street where the steeple was blown over.

They are also responding to the 200 block of Market Street where the rear section of a building has collapsed.

No injuries have been reported.

WSAZ has a crew headed to the scene.