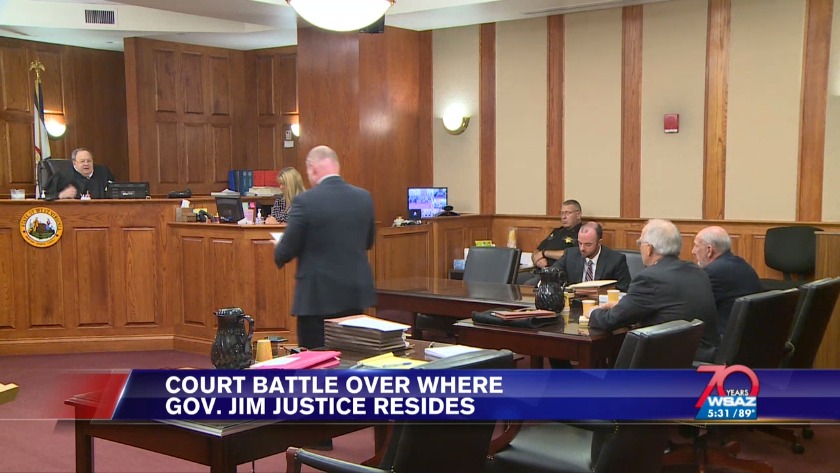 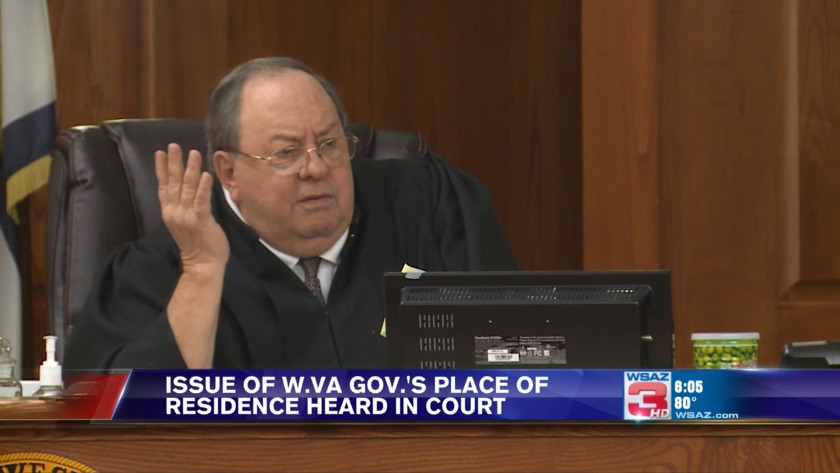 Issue of Gov. Justice's place of residence heard in court

Gov. Jim Justice's attorneys are telling the West Virginia Supreme Court that a constitutional residency requirement is "nebulous" and would entail “court-supervised monitoring” of his whereabouts.

The Republican's filing comes amid lawsuits by Democratic state Del. Isaac Sponaugle that have accused Justice of not spending sufficient time in Charleston in violation of a state Constitution passage that the governor “shall reside at the seat of government."

Justice's lawyers argued in Friday's filing that the question of where the governor resides is political and can be addressed by voters in his reelection or by lawmakers if they want to pursue impeachment.

Justice is being sued by a Democratic state delegate who says the state constitution requires Justice to reside in the Governor's Mansion in Charleston, not his home about two hours away in Lewisburg.

Judge Charlie King heard arguments from Justice's lawyers and state Delegate Isaac Sponaugle about how the issue should proceed. He decided to make both parties resubmit materials that will be reconsidered.

"I think everyone knows what the legal issues are, but I don't think they know what the facts are," King said.

King said he does not agree with questions he was given by Justice's lawyers asking for clarification on the Constitution's requirements, specifically the definition of the word "reside."

"It would be almost impossible for you to control discovery in a case where we do not even know what the legal issues are," Justice's attorney George Terwilliger said. "The purpose of the questions are to define what the law is to set the proceedings to further the case."

Sponaugle said Justice's team is using delay tactics to prevent him from obtaining evidence on the case or conducting a deposition of the governor.

"I believe he has made public remarks that say he doesn't reside at the mansion but in the pleadings he says he is residing as far as he is concerned and that the Constitution is vague," Sponaugle said.

King said the case will likely go the West Virginia Supreme Court of Appeals to make a final ruling on the legal proceedings after he reviews new materials.

No future court dates have been set.

The order also means Governor Justice’s legal team will have to start answering questions about his residency preference.

Lawyers for Justice are supposed to respond to the first set of discovery requests within 30 days, according to King’s order.

King presided over a hearing June 5 over whether the case and discovery should go forward. The judge asked then how the governor’s residency could be enforced, in practical terms.

The lawyers for the Governor’s Office, as they did in earlier court filings, described the term “reside” as “nebulous” and “slippery like an eel.” They said it’s not the role of circuit court to enforce a concept that’s too loose to be enforced.

The lawsuit was brought by Delegate Isaac Sponaugle, D-Pendleton, acting in his capacity as a citizen. He is a lawyer in Franklin.

“I’m pleased with the Court’s decision,” Sponaugle said Wednesday. “The Court affirmed that my Writ of Mandamus is the appropriate legal action to enforce and bring into line Jim Justice’s conduct as Governor.”

Sponaugle contends Justice violates the state constitution’s requirement to reside at the seat of government.

Justice has continued to make his home in Lewisburg, about two hours away from Charleston.

He says he works hard no matter where he is and that he may be reached at all hours with his flip phone.


UPDATE 6/5/19 @ 1:45 p.m.
A judge in Kanawha County is being asked to order West Virginia Gov. Jim Justice to move full time in the governor's mansion.

It is widely known that Justice spends the majority of his time at his home in Lewisburg.

But Isaac Sponaugle III, a delegate from Pendleton County, filed a lawsuit as a private citizen, saying by law that the governor must live in Charleston.

The main question that was asked is, ‘How do you define “reside?” Lawyers for the governor asked the number of hours the governor needs to be at the mansion.

David Pogue, Justice’s attorney, said, “Is he residing there if he sleeps in Charleston? If he gets up in the morning and travels about the state, spending his waking hours elsewhere? Or conversely, what if he sleeps right outside of the city limits but spends all day at the governor's office?"

A state delegate is suing West Virginia Governor Jim Justice over the governor's place of residence.

Gov. Justice tells WSAZ, "It's a stunt by one of the more radical Democrats that only wants me to waste taxpayer dollars." He also added, "I don't need someone cooking, doing my laundry, waiting on my every whim, and having party after party at the taxpayers' expense," referring to life at the governor's mansion.

Sponaugle (D-Pendleton, 55) is the Assistant Minority Whip in the West Virginia House of Delegates.

The lawsuit says Gov. Justice, by law, should live at the seat of Government in Charleston.

However, Gov. Justice lives in Greenbrier County, and according to the lawsuit, "keeps many of the public records, books and papers pertaining to his respective office there."

"This is despite housing afforded to him at the West Virginia Governor's Mansion located at 1716 Kanawha Blvd. E, Charleston, West Virginia."

Sponaugle also says in the lawsuit that members of the West Virginia Legislature have publicly raised concerns about the "habitual work absenteeism" of Gov. Justice, claiming that behavior has caused "certain scandals, mismanagement of public monies, lack of communication among agencies and a decrease in general productivity of state government."

One of those recent "scandals" includes Justice asking Commerce Secretary Woody Thrasher to step down after issues with the RISE West Virginia program that his department handled.

The lawsuit alleges that Justice lives and works in Greenbrier County and only shows up in Charleston "when it is convenient to him." This, Sponaugle says, violates Section I of Article VII of the state Constitution.

Sponaugle is asking that Justice be ordered to live in Charleston during his term in office. He also is asking a judge to order Justice to keep public records, books, and other papers pertaining to his job at the seat of government as well.

The delegate filed the lawsuit in Kanawha County Circuit Court as a "citizen and taxpayer of Pendleton County."

Our media partner WVMetroNews reports that the subject of where the governor lives has been a lingering issue throughout his time in office, but has heated up in recent weeks.

Gov. Jim Justice continues to live in Lewisburg and WVMetroNews reports that the governor has not put forth a constitutional argument.

In a press conference Monday, the governor responded to the complaint about his home, saying he gets results and saves money, “It doesn’t matter whether I do it in the back of a Suburban or from the top of the dome.”

Justice also used his infamous white board to illustrate his points.

According to WVMetroNews, the whiteboard listed a series of tasks that Justice says he does not need mansion staff for because of his lifestyle choice: “Don’t need to do laundry, cook, make bed, clean bathroom, drive me everywhere.” As the white board indicates, he also does not need “PARTY PARTY PARTY Wine Room.”

WSAZ is reaching out to the governor's office to see if Justice has any additional comments now that the lawsuit has been filed.

Top Democrats in both the House and Senate have asked Justice to discontinue working "off-site," or resign.

In response to the calls for resignation, Justice issued this statement, saying he works hard and does not intend to resign:

"West Virginians need to ask themselves, 'are things better in West Virginia since I took office?' Look at the highways, the revenue numbers, the changes to our education system. This state is on the move like you can’t imagine. Shame on the lifetime politicians for their mean-spirited remarks calling for my resignation. These political lifers have been there forever, accomplished nothing, and kept us in 50th place. Since I took office, I turned a $500 million deficit into a revenue surplus, without cutting our budget to the bone. I changed the footprint of education by removing red tape and giving control back to the counties. I proposed and signed into law a 5% across-the-board pay raise for our teachers and state employees. I proposed the Roads to Prosperity Constitutional Amendment, and the people of West Virginia passed it with 73% of the vote. I’ve directed a massive amount of state resources to attack the opioid epidemic. I got our veterans the long overdue state income tax exemption for their retirement, and our correctional officers the pay raise they all deserved. I want nothing for myself from being Governor. I don’t take a salary or PEIA, I don’t need business connections or the next hot tip. I drive myself everywhere I go, without taking a dime from the state. Without any question, our state is on the move. We have hope, and we have brighter days ahead. From the moment I took office, I have not stopped working to pull us out of 50th place. Goodness is coming to our state, and I intend to remain in office as your Governor to fulfill my promise to the people of West Virginia."

Deputies investigating fatal shooting in Mingo County
Related Documents
Comments are posted from viewers like you and do not always reflect the views of this station. powered by Disqus