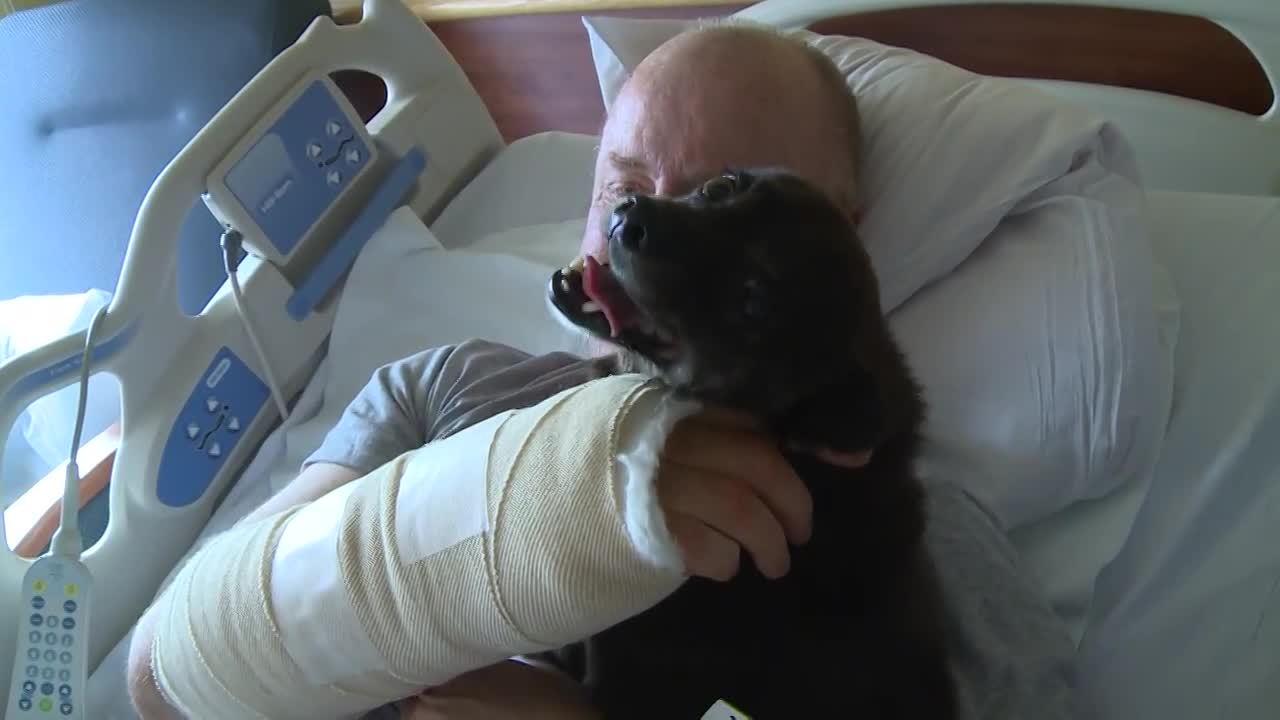 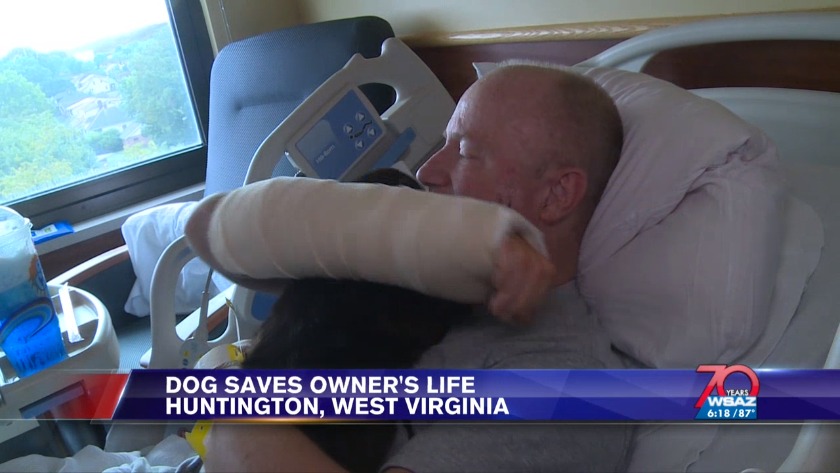 Dog helps save owner's life after he falls from flood wall

HUNTINGTON, W.Va. (WSAZ) -- UPDATE 8/15/19 @ 2:12 p.m.
Jimmy Hale and his dog Taco were walking along the floodwall in Portsmouth, Ohio when Hale fell and passed out. It was about a 15-foot drop and Hale didn't come to until the next morning.

Jimmy Hale and his dog Taco sit together in his hospital bed as he recovers from his injuries after a fall.

In this extended interview clip, Hale explains how Taco helped save his life, and reunites with a city worker who found him and called for help.

ORIGINAL STORY 8/14/19
A man is crediting his dog for helping to save his life after he suffered a bad fall.

Jimmy Hale says he was walking along the floodwall in Portsmouth around 7:45 p.m. Monday, Aug. 5 with his dog Taco. He says they typically do a 3-mile run/walk and also play fetch.

Hale says during that time, he fell off the floodwall, which is about a 15-foot drop and ended up passing out. He says he didn't come to until Tuesday morning.

"I didn't realize the extent of my injuries until I woke up," Hale said. "I was pretty injured."

Hale says he could hear his dog nearby whimpering but couldn't see her anywhere.

"It had been several hours that I was there and I was in a lot of pain and shouting and asking for help," Hale said. "The pain was so bad. It seemed like I was there forever."

Hale says his calls for help went unnoticed for hours.

"Finally heard a lawn mower," he said. "A riding lawn mower had come up, and I heard him turn the lawn mower off and then I started hearing footsteps come toward me."

It was Mark Puckett, who works for the city of Portsmouth. Puckett says he was alerted that Hale was there because of his dog, Taco, who stayed on the flood wall until someone showed up.

"I was cutting grass for the city of Portsmouth on our levee system down there," Puckett said. "During the process of cutting the grass, I ran into Taco. I saw Taco on the top of the wall and was curious at to what was going on. I got off the tractor and was going to give Taco some water, and I saw that gentleman down there. At first, I just thought it was a dog that was abandoned and then I saw him laying down there."

Firefighters and paramedics quickly came to the scene. Hale was flown to St. Mary's Medical Center where he is now recovering.

Hale suffered extensive injuries to his pelvis and his right wrist. He also suffered some cuts and scrapes on his face.

He says had it not been for his dog, Taco, and Puckett, he doesn't know if he would've been found.

"I just didn't know if anyone would find me," Hale said. "But Taco sat there for 10 hours waiting for someone to find me, and they did."

"They are our heroes," said Ruth Windsor, Hale's sister. "We could not be more thankful for them than anything in this world. They both saved our brother. They truly did."

Hale hadn't seen his dog since Monday, Aug. 5, the night the incident happened, so his sister brought her to the hospital Tuesday for the two to be reunited.

"She's going to be treated extra special when daddy gets out of the hospital," Hale said.

He says the story of how the two became partners was actually an accident on its own. He says he was living in California and had gone to the store one morning to get breakfast. As he was walking out of the store, there was a couple selling puppies.

He says he immediately made eye contact with Taco and couldn't help but take her home.

"If it wasn't for her, I don't know if I would've been found honestly," Hale said. "Her determination to sit there for over ten hours to wait for someone to find me, and that's what she did."

Hale had to undergo surgery and is doing physical therapy. It will still be a few days before he can go home and be with Taco.