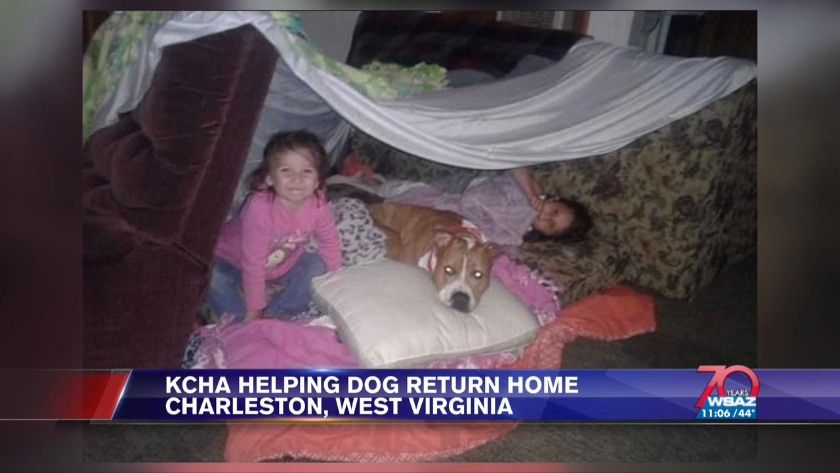 Zeus will begin a long journey back to Butte, Montana for the holidays. (Courtesy of Kanawha-Charleston Humane Association)

Nearly two months after getting dog-napped from Butte, Montana, a dog found in our area is back home with his family.

Zeus was found in November in the Kroger parking lot in St. Albans.

He was with a man named Jason Mounts, who has outstanding theft warrants in Montana.

Mounts was arrested that night after police say he assaulted an officer and objected to being finger-printed.

A Nitro humane officer dropped Zeus off at the Kanawha-Charleston Humane Association.

When the shelter microchipped him, they found out Zeus was from Butte, Montana.

That kicked off Zeus' journey home, taking 30 volunteers to get him back to his family.

He arrived around midnight Tuesday.

UPDATE 12/16/19 @ 12:25 p.m.
Nearly two months after being discovered during an arrest in Kanawha County, a dog from Butte, Montana is expected to make it home Monday.

According to the Kanawha-Charleston Humane Association, Zeus' estimated time of arrival in Butte is before bedtime.

One volunteer is closing out Zeus' journey. They are chauffeuring the pit bull the final 650 miles.

The pit bull's owner says he was taken along with some other items while a "family friend" was staying with them around Halloween.

In mid-November, Zeus was found in an abandoned vehicle with a man named Jason Ryan Mounts in a grocery store parking lot in St. Albans.
Mounts was arrested after police say he assaulted an officer and objected to being fingerprinted.

Keep clicking on WSAZ.com and the WSAZ mobile app for the latest information.

He was stolen from a home in Montana and was found in a Kroger parking lot in St. Albans with a man who is now facing charges in both Montana and Kanawha County.

They say that 30 volunteers helped along the way to get Zeus back home to Montana before Christmas to be with his family, which includes two little sisters who are five and seven.

Zeus was stolen from a home in Montana and ended up in the parking lot of the Kroger in St. Albans with a man who faces charges in Kanawha County, as well as in Butte, Montana.

Zeus, who's a pit bull, is about eight hours into his journey. As of Tuesday night, he was in the St. Louis area. He ate cheeseburgers from Wendy's on the drive, and we are told he was a perfect gentleman.

He will be in St. Louis for the next few days before the next leg of his journey on his way west. The Kanawha-Charleston Humane Association has arranged the journey home to his family that includes two little sisters who are five and seven.


ORIGINAL STORY 12/4/19
The Kanawha-Charleston Humane Association is looking for some volunteers to take a pit bull named Zeus after he was found more than 2,000 miles away from home.

Zeus came to KCHA in mid-November when he was dropped off in the middle of the night by a Nitro humane officer.

Zeus' microchip was scanned by KCHA and they found that he was from Butte, Montana.

According to KCHA officials who made contact with Zeus' owner, the dog was taken along with some other items when a "family friend" was staying with them around Halloween.

The man that was with Zeus, Jason Ryan Mounts, was arrested in St. Albans last month after he was found in a Kroger parking lot in what appeared to be an abandoned vehicle. He was arrested after police say he assaulted an officer and objected to being fingerprinted.

KCHA executive director Chelsea Staley said finding Zeus a way back home is just one small example of the work the association does year-round.

"I think this is just one more thing that we do all year," Staley said. "So while this is a holiday heartwarming story and this really pulls at your heart strings this time of year, this is just an example of what we do 365 days a year. So if it was June, we'd still be trying to get Zeus home to Montana."

Mounts is currently being held at the South Central Regional Jail and has outstanding theft warrants in Montana.