UPDATE | Department of Transportation working to fix I-64 lighting problems 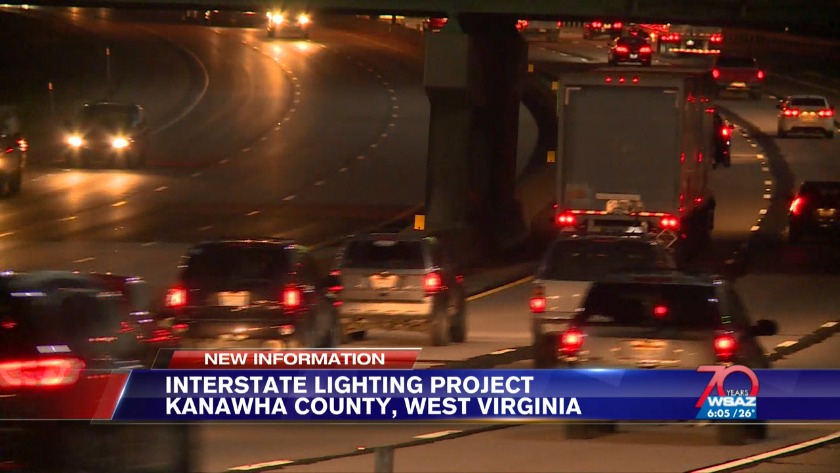 Department of Transportation working to fix I-64 lighting problems 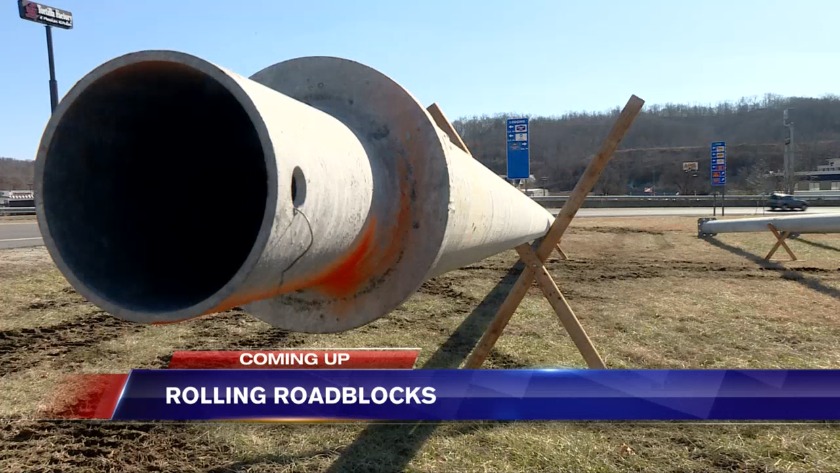 What to expect during I-64 light installation project 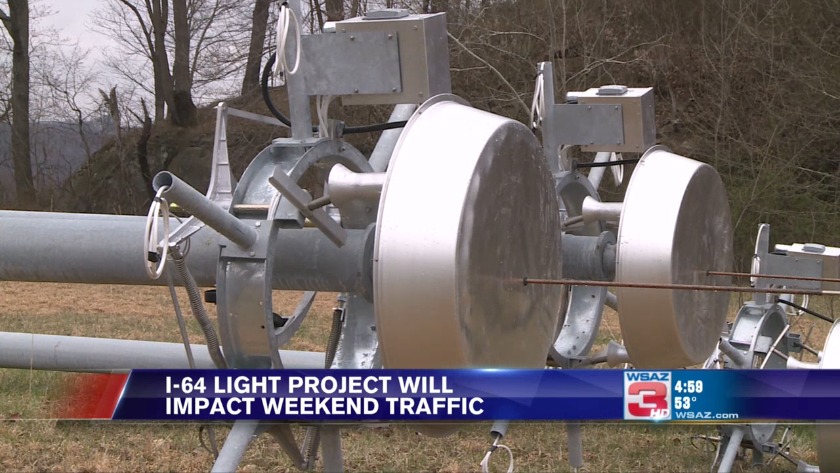 HUNTINGTON/CHARLESTON, W.Va. (WSAZ) -- UPDATE 12/18/19 @ 5:40 p.m.
Work is underway to make repairs to lights along Interstates 64, 77 and 79 in Kanawha County. This comes after a study by Kanawha County Emergency Management that said more than 80 lights were not working properly.

A Kanawha County survey says more than 85 lights are out along Interstate 64 despite an ongoing Department of Transportation project to improve lighting along the busy highway.

Many of these lights are part of a $21 million project to improve visibility on one of West Virginia's busiest sections of road.

"We have three main interstates that come and intersect here in the city of Charleston and Kanawha County," Emergency Management and Homeland Security deputy director Mike Oakley said. "The lights at the 77/79 intersection were not working at all. There are 13 or 14 of those brand new poles that were not working."

Oakley completed the survey and said lighting is critical to preventing crashes on this twisty section of road, and conditions only get worse during the winter months.

"There are so many accidents in that area," Oakley said. "There is at least one accident there a day. In the evening and at night, if it's lit and you can see, then it definitely increases your ability to be able to maneuver those curves."

Crews have already been seen repairing lights and replacing bulbs along the interstate since the county commission sent a letter to Gov. Jim Justice and the Department of Transportation with the study's findings.

"Our lighting maintenance team has been out, performing previously planned maintenance on areas that need repaired or re-lamped, and the public should begin to notice the progress," Department of Transportation Secretary Byrd White said in a statement. "There are some current lighting projects that fall within active construction projects and are being addressed by the contractors."

Despite repairs to fix lights that were not working, Oakley said, others have since stopped lighting the roadway.

"As evidenced by the 26,914 miles-worth of work that the Department of Transportation has completed on West Virginia’s secondary roads in the past nine months alone, our organization and its people care deeply about providing a safe and comfortable traveling experience for all motorists within our great state," Secretary Byrd White said in a statement. "We are committed to accomplishing this goal and we are always working, around the clock, to continue improving our transportation infrastructure as expeditiously as possible."


UPDATE 12/11/19 @ 5:55 p.m.
Kanawha County Commissioners have sent a letter to Gov. Jim Justice and the Department of Transportation (DOT), requesting work on what they say are dangerous conditions on Interstate 64.

This comes just nine months after the DOT spent $21 million as part of the Roads to Prosperity project to install new lights along the busy highway. The problem is many of those new lights are not working.

"You would think that it is common sense that if you would spend that type if money that you would make sure they are operational," Commissioner Ben Salango said. "Unfortunately, it's been going on for many many months and we need a resolution. We need it fast before someone gets hurt or killed."

Better lighting is something that could have prevented Christina Bryant's dad from being killed in a head-on crash seven years ago. She said I-64 is one of the only roads in the area that is not lit.

"If it's foggy and it's dark then you have a very difficult time trying to see even with the headlights on," Bryant said. "So the lights, the street lights, would make it easier to see."

"Adding more lights all the way up would make it a lot easier for people to be able to see and not as dangerous for people," Bryant continued.

A survey completed by Kanawha County Emergency Management and Homeland Security shows more than 84 lights along the interstate do not work. That includes a number of new LED lights installed in March.

DOT released the following statement in response to an interview request about the problem:

"The interstate lighting project has been ongoing. Originally scheduled for completion by the end of this year, there have been some delays (wire thefts, difficulty getting power), and we are now looking at an estimated completion date of February 2020."


UPDATE 3/23/19 @ 5:40 p.m.
Crews worked from Kenova to Barboursville on Saturday to install massive light poles along I-64 exits. The projected created congestion for drivers on the interstate and surrounding areas.

"We hit a little bit of traffic on I-64 eastbound. Luckily, it wasn't very bad," driver Barry Fike.

A helicopter was used to install the light poles. Officials expected heavy traffic and an installation process lasting about two hours at each exit.

However, officials said the process was quicker than expected. West Virginia State Police slowed down traffic miles back from the exit being worked on at the time. This allowed drivers to move at a slow pace instead of being completely stopped.

"We were very happy that it was still kind of moving," Fike said.

Traffic rerouted to secondary roads caused the most trouble for drivers, especially on Route 60 in Barboursville.

Originally, crews planned to hit the road again on Sunday to finish up the work, but they finished up the installation on Saturday.

Troopers said there should not be any traffic or road blocks on Sunday.

Officials said the lights are expected to be on in two to three months.


UPDATE 3/21/19 @ 7:30 p.m.
Samantha Burgess often makes the commute from Kanawha County to Cabell to see her daughter in the hospital and says the light poles being installed along six exits of the highway would make her drive safer.

"We’ll be able to stay longer to see our daughter,” she said.

But the installation also makes for heavy traffic, right as the weekend begins.

"Anytime we have to shut the interstate down and divert (traffic) to U.S. 60, it's a major challenge,” Cabell County EMS Director Gordon Merry said.

Starting on Saturday crews will be installing the posts with helicopters. Work will start west at Exit 1 in Kenova and move east to the Huntington Mall exit.

State troopers are going to be blocking off all lanes of traffic several miles back from the exit being worked on at the time. Secondary routes near the interchanges will also be blocked off while the lights are being installed.

With a project of this size, there are some safety concerns when it comes to drivers hitting the road for their weekend plans.

"It’s something unusual we don't see it every day, it's a distraction to the drivers, people are going to be looking,” Merry said.

But law enforcement has made preparations to ensure that if there's accidents first responders will still be there in minutes.

"And we have Huntington medical command which can direct the ambulances in around the congestion and get them into the hospitals,” he said.

The District 2 construction engineer estimates that the lights will be on and working in about two to three months.

Drivers are advised to expect delays along I-64 both days and to avoid the interstate and interchange areas if possible.


ORIGINAL STORY 3/20/19
We have a traffic alert this weekend for drivers on Interstate 64 where a construction project to add lighting will affect traffic flow, the West Virginia Division of Highways says.

DOH workers and its contractor, Pritchard Signal and Light Company of Scott Depot, are working on the Huntington Area Roadway Lighting project along I-64 at six interchanges from Exit 1 (Kenova) to Exit 20 (Huntington Mall).

A helicopter will be used Saturday, March 23 and Sunday, March 24 to install lighting towers at those exits. West Virginia State Police troopers will help with traffic control during the work, including using “rolling road blocks.” During that time, troopers will block all lanes of I-64 several miles back from the interchange being worked on in both directions and will be traveling at a reduced speed.

The DOH also reports that secondary routes at the interchanges will at times be blocked to traffic as the contractor is working at that specific interchange). This will allow there to be no vehicles in the areas of the interchange while the helicopter is lifting and installing the high mast towers.

Drivers are advised to expect delays along I-64 both days and to avoid the interstate and interchange areas if possible.