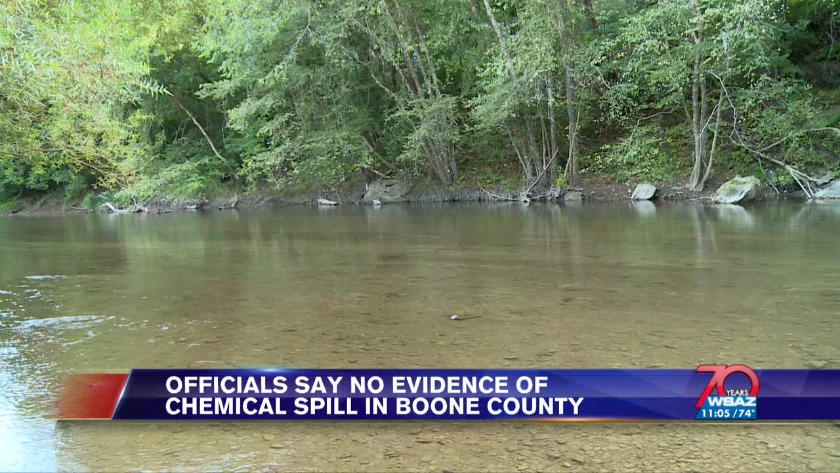 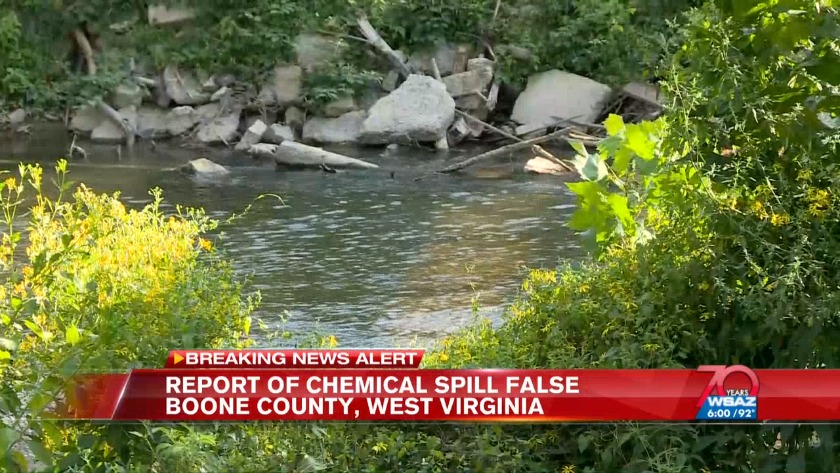 Officials say no evidence of chemical spill in Boone County

The reported MCHM spill in Madison is unconfirmed at this time, according to the West Virginia Department of Health and Human Resources.

"When this is summer, you can usually catch people out here swimming or fishing,” he said.

He and his friends planned on going for a float down the river, but a chemical spill scare impacted their plans.

"It is kind of scary because here in Boone County people go swimming, like right here in the river all the time."

There was a report Tuesday morning of a possible MCHM spill miles upriver in Boone County that could potentially make its way to the Coal River and affect people downstream in Kanawha County, but Tuesday evening officials confirmed there was no spill.

For many, like McNeely, who lived through the chemical spill of 2014, hearing about a possible leak brought back difficult memories.

"I remember coming home from school one day because I was back in middle school at the Madison Middle and they sent us home early and we didn’t know why,” he said. "And they said because there’s something in the water."

Jeremy Toler remembers it too well.

"Just smelled like bubble gum,” he said. "At home, also we just pretty much used bottled water for everything, showering, bathing."

Toler says after that experience he knew there was nothing to be worried about Tuesday.

"You could tell it was something different. Today I haven’t smelled or tasted anything. I was literally just walking my dog and my wife said ‘hey go see if there’s dead fish in the river.’ "

As for McNeely and his friends, they planned on enjoying the late summer night the only way they know how.

"I’m happy about it cause we get to go swimming now,” he said.

He said there was a report at 9:30 a.m. Tuesday of a possible MCHM spill miles up river in Boone County that could potentially make its way to the Coal River and affect people downstream in Kanawha County.

By Tuesday afternoon, the West Virginia Department of Health and Human Resources informed a water plant supervisor in St. Albans that it turned out to be a false alarm. James said precautionary measures were taken after the initial report of a possible chemical in the water.

A Boone County Emergency Services official tested the water and found no evidence of chemical contamination. It was concluded there must have not been a spill and, if there was a leak of some sort, it did not make it to the river.

MCHM, a chemical used to clean coal, caused the widespread water outage in January 2014 throughout the Kanawha Valley and beyond. That spill affected more than 300,000 people.


UPDATE 9/10/19 @ 4 p.m.
The reported MCHM spill in Madison is unconfirmed, according to the West Virginia Department of Health and Human Resources and the state Department of Environmental Protection.

The WVDEP released the following statement:

"The WVDEP has no confirmation of a spill. An anonymous report of coal companies contaminating streams resulting in water discoloration and a suspicious smell near the city of Greenwood in Boone County was sent to the National Response Center, which was then sent to the WVDEP’s Homeland Security and Emergency Response Unit. The WVDEP notified its inspectors in its Division of Mining and Reclamation (DMR), who are currently investigating the claims in the report, as well as the state Division of Health and Human Resource’s Bureau for Public Health (DHHR-BPH)."

In the DEP's report, it was stated, "(a) caller reports the coal companies are contaminating streams from three drain pipes at a dam resulting in the water in the streams to be discolored and have a licorice smell."


UPDATE 9/10/19 @ 3:45 p.m.
The reported MCHM spill will not effect the entire Kanawha Valley, according to a spokesperson from West Virginia American Water.


ORIGINAL STORY 9/10/19 @ 2:15 p.m.
According to the St. Albans Municipal Utility Center (MUC), a spill of MCHM has been reported above Madison, West Virginia.

A statement from the St. Albans MUC says the spill happened around 9 a.m. Tuesday.

The spill amount is currently unknown.

Lincoln County PSD, WVDEP, and WVDHHR are investigating and working to track the spill.

MCHM is a chemical used to clean coal. It was the chemical spilled in the massive January 2014 incident at Freedom Industries that affected the drinking water for more than 300,000 people in the Kanawha Valley and beyond.