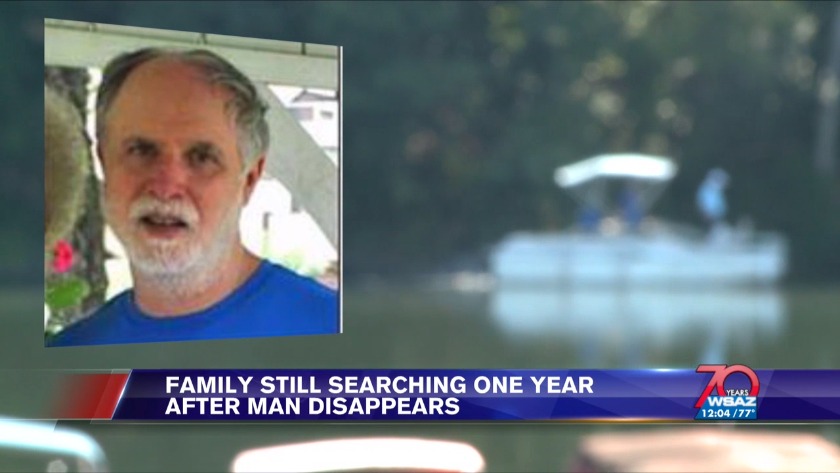 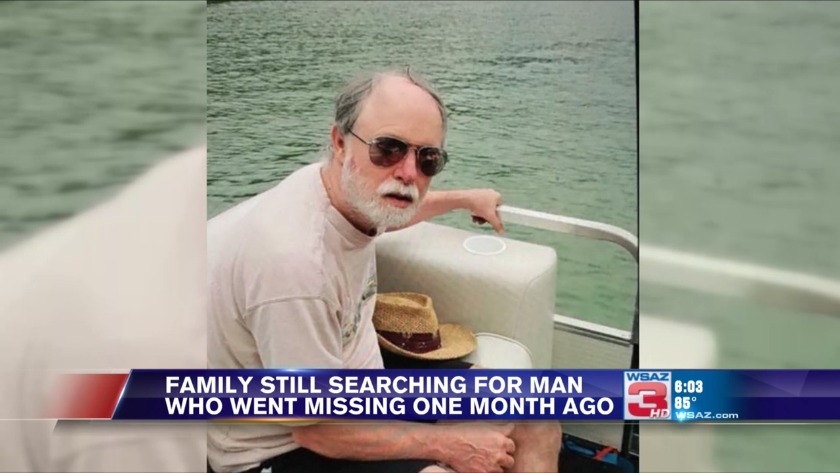 Family still searching for loved one 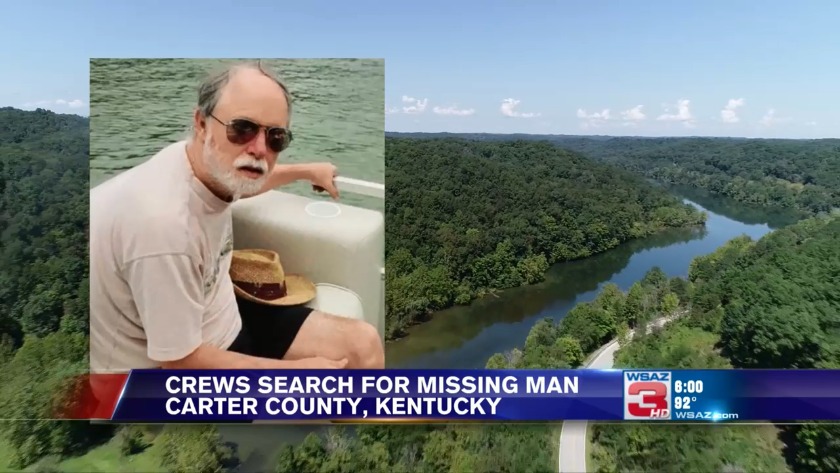 That day turned tragic when they got back to the marina and Richard wandered off and went missing while his son was loading up the boat.

"It just comes up when you least expect it," his wife Leslie said when she has moments where she thinks about him.

Her husband suffers from Alzheimer's, but was familiar with the marina. The couple had been at the playground with their grandchildren. Leslie says he was walking the perimeter of the playground and disappeared.

Richard Lea was reported missing from Grayson Lake by his family on Labor Day 2018.

“We started down the hill where the boat dock is and I saw him walking the parking lot. When we got down there, he wasn’t. Where he went from there we don’t know.“

Within minutes, crews were out searching by boat, drone, atv, and helicopters, but a year later, still no sign of Richard.

Leslie says she’s hoping by speaking again on the anniversary of her husband’s disappearance, it might trigger a memory from someone else who may have seen Richard.

“The marina was full. There were boats going in and out. It was right at the busy time. If you remember, a direction would help us.“

The family is still holding out hope that they will have closure, and soon.

“You always have hope,” said Leslie. “It is always there, it doesn’t go away. He could barely take care of himself. I don’t know how he could be on his own, and it is hard to imagine someone would just take him in and take care of him.”

Days before the anniversary, the family was back at Grayson Lake. Leslie says part of her kept looking at the shoreline hoping she’d see a sign of her husband.

He is around 5 feet 6 inches tall and was last seen wearing blue cotton shorts, a tan T-shirt and a camouflage hat. He has a birthmark on his right cheek near his ear. If you think you've seen him or know where he may have been, you should call the Ashland post of Kentucky State Police.


UPDATE 9/3/19 @ 12:20 p.m.
One year ago today, a fun day at Grayson Lake turned tragic for the Lea family. They are still searching for their loved one who disappeared that day.

Richard Lea is non-verbal and suffers from dementia, according to his family. He vanished on Labor Day in 2018 at a place his family had been to many times.

While Richard's son was loading up the boat that day, Richard walked with his wife and grandkids to a nearby playground. He was last spotted around the marina. Before anyone realized it, he had vanished.

Search crews spent days looking for any sign of Richard, but never found anything.

He is around 5 feet 6 inches tall and was last seen wearing blue cotton shorts, a tan T-shirt and a camouflage hat. He has a birthmark on his right cheek near his ear. If you think you've seen him or know where he may have been, you should call police.

Richard's wife, Leslie, tells WSAZ she is still hoping for answers. You can watch our story with her Tuesday at 6 p.m. on WSAZ.

Richard Lea and his family had been enjoying a day on the water over Labor Day. When Lea's son was loading up the boat, Lea went walking around the marina, and before anyone realized it, he had vanished.

"He had a triangle that he walked," said Lea's wife Leslie. "And as he did that, he could see everybody too. So what happened different that day, we can't figure out."

Lea is back at their home in Wheeling, W.Va. where she waits for the phone call that her husband is safe.

"At odd moments you get hit with this he's missing and you haven't found him," she told WSAZ over FaceTime. "There's this void that's just hanging there that you just don't know what to do with."

Lea was wearing blue shorts, a tan t-shirt, and camouflage hat when he walked away. He also has a birth mark on his right cheek by his ear. Crews have spent a month now combing the area by water, foot, and air looking for anything.

"There's always that hope. Since they've not been able to find anything of his, then that hope is still there that somebody has picked him up, or he is in a hospital and we don't know about it."

While the family holds out hope, they know the odds are against them. But because nothing has been found, it helps keep their spirits up that they will have a happy ending.

"I understand that it's been a month, and there's wildlife, and if he was in the water, and the consequences of all these things."

Anyone with information about where Lea may be should call Kentucky State Police or the Carter County Sheriff.

The family of Richard Lea gathered at Grayson lake again Friday night to work on the next phase of their rescue plan.

Lea and his wife, Leslie, are from Wheeling but were in the area visiting their son and daughter-in-law for the long weekend. They spent Monday on Grayson Lake. He went missing while he and his wife were with the grandchildren at the playground, and their mom and dad were unloading their boat.

Lea's family says he has frontal lobe dementia, which affects his speech and his personality. He's nonverbal but he can say yes, and tell you his name, and he might be able to tell you he is OK. However he is unable to take care of his basic needs.

According to his family, he was an aircraft mechanic who walked a lot around airplanes and hangers, and his love for aviation has carried over into his dementia.

His family says he feels he has to walk or pace all the time. That is why they say him walking across the parking lot on Labor Day wasn't unusual. What was unusual was him going a little farther away from his wife than usual. They say he normally stays close when he is in a space where he's not familiar.

Lea is around 5 feet 6 inches tall and was last seen wearing blue cotton shorts, a tan T-shirt and a camouflage hat. He has a birthmark on his right cheek near his ear.

If you think you've seen him or know where he may have been, you should call police.


UPDATE 9/4/18 @ 5:48 p.m.
A husband and father with dementia has been missing for 24 hours in Carter County, Kentucky. Rescuers have no solid leads where Richard Lea could be. He was last spotted at the marina at Grayson Lake.

With the hot temperatures Tuesday, it's a very dangerous situation.

Both helicopters and search dogs were called in to search for Lea.

He’s 62 years old. Making things more complicated, he has dementia and is nonverbal.

His family spent Tuesday waiting near the incident command center set up at the marina parking lot. They declined to speak with us.

But Carter County EMA Director Jeremy Rodgers said they were waiting and hoping.

They were unloading their boat Monday evening after a long weekend at Grayson Lake when they said Lea wandered off in the crowd around 6 p.m. By the time they realized what happened, he was nowhere to be found.

"It's unfortunately not surprising,” Rodgers said. “It happens very easily and could happen to any of our families."

Six rescue dogs worked till 2:30 a.m. with no firm leads. Five new ones began their search at 8 a.m. But they sniffed nothing definitive.

"It's tough here. Number one, we're dealing with the lake itself. Then we're dealing with undergrowth once you get into the tree line, things of that nature. There's just this vast area we're trying to cover because we don't have a great exact direction of travel so we're having to search a large area around the lake and marina,” Rodgers said. "It's unbelievable the distance they can travel in a short period of time. You don't realize how easily it can happen."

While warm and muggy temperatures were favorable overnight, the extreme heat during the day is not. Dehydration is a real concern, making search efforts all the more urgent with every passing hour.

"It’s dangerous for searchers who are packing bottles of water with them, let alone someone who is out and doesn't have any access to fluids,” Rodgers said.

If you think you’ve seen him since Monday night, you're asked to call 911.


ORIGINAL STORY 9/3/18
A 62-year-old man who has dementia is missing from the Grayson Lake area of Carter County, Kentucky.

Richard Lea was reported missing by his family around 6:30 p.m. Monday.

Several different agencies are involved in the search for Lea.

He is around 5'6" and was last seen wearing blue cotton shorts, a tan t-shirt and a camouflage hat. He has a birth mark on his right cheek near his ear.

Despite being near the lake, troopers say Lea went missing on land.

Keep checking WSAZ Mobile and WSAZ.com for the latest information.