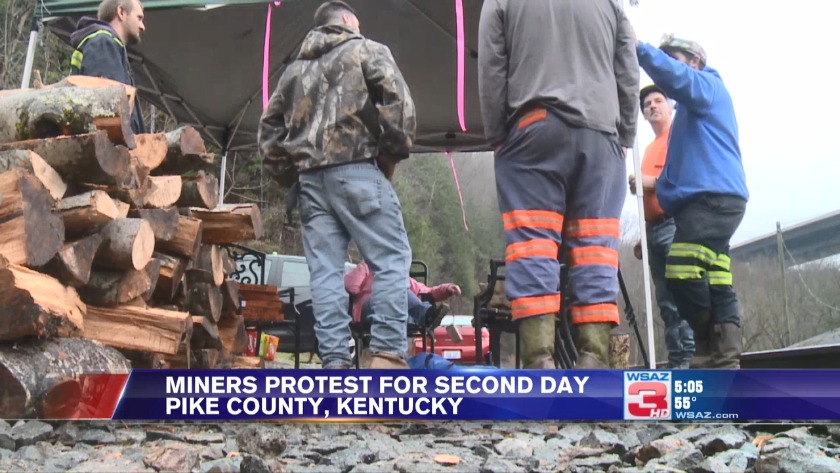 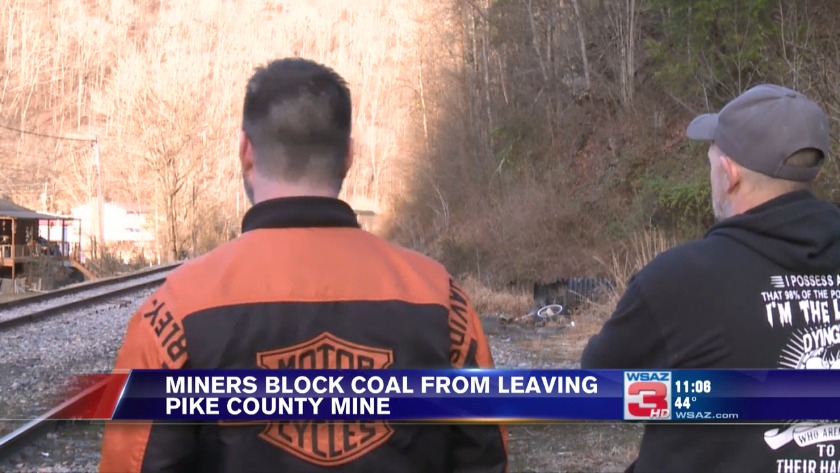 KIMPER, Ky. (WYMT/WSAZ) - UPDATE 1/15/20 @ 7:25 p.m.
Pike County miners are packing up the blockade camp at the railroad tracks in Kimper after three days of protesting.

Two groups of miners, both working for Quest Energy, met at the tracks Wednesday. One group insisted they would not leave until they were guaranteed their next paycheck.

The other group wanted the protesters to let the 120 train cars full of coal pass through.

"They've always paid. You know, the checks might've been late one or two days," said Tommy Howard. "The only reason we're here, we all want to go back to work. I mean, enough of this nonsense. Let's get back to work. Let's go mine coal."

There was a heated exchange between the men, the railroad tracks acting as a dividing line between the groups until eventually, the two sides came to an agreement.

"I have not one bit hard feelings against those guys. The only thing I want is to go to work. I mean, you can see the march of 50 men that came over. I mean, right there's the face of men that's got families," Howard added.

The remaining five miners said it took stopping a train to get their last paychecks, and they were afraid to leave before getting Friday's paychecks.

"'Cause that's all we ever wanted. We didn't want any of this. Listen, I've been here for three days. I would much rather be home in my nice, warm bed, than standing here," Blackburn said.

The company issued the Friday checks early and told the men they would see the funds by the end of the business day Wednesday. Once the miners saw the funds in their bank accounts, they agreed to pack up camp and let the company take its coal.


UPDATE 1/14/20 @ 7:05 p.m.
Miners in Pike County are camped out along train tracks now for a second day, saying they will not leave until they are paid what they are owed.

Dozens of miners spent the night along the tracks leading from Quest Energy in Blackburn Bottom.

Tuesday was the second day for the miners to be out. Miners said they worked from Dec. 16, 2019, until now without getting paid. Those on the tracks say they will not go back to work until their paychecks are in their bank accounts.

"Never in my life did I think I would be standing here on a rainy day, on a train track, holding a train. I never in my life thought that it would come to this," said one miner.

Early Tuesday, some of those miners told WYMT that they received a pay stub early in the morning, but the money hadn't processed yet.

However, Quest Energy, which owns the mine, says all of the employees have been paid, releasing the following statement on Tuesday:

"All the employees have been paid what they are owed. Unfortunately what they are demanding now is ransom and spreading lies at the expense of all of the rest of our amazing employees, which have reached out with great support for the company and their jobs. It’s unfortunate the lies that are being spread by them as it could cost all the rest of our 200+ employees future employment in an already challenged industry. We pray for the rest of our employees and hope these few people understand their actions may put the rest of these hard-working men and women out of work."

The miners have been blocking a loaded coal train from leaving the area.

CSX came in Monday and removed the engine from the area but left the loaded cars behind on the tracks.


ORIGINAL STORY 1/13/20
Pike County miners are blocking a train loaded with coal from leaving a mine in Kimper.

A group of men stood on the tracks leading from Quest Energy in Blackburn Bottom Monday afternoon.

A train loaded down with coal is stuck on the tracks. A CSX crew went to the tracks to get the engine and left the loaded train cars there.

Miners said they worked from Dec. 16, 2019, until now without getting paid. Those on the tracks say they will not go back to work until their paychecks are in their bank accounts.

We are told more miners are on the way.

"Some of the employees are behind 8 days and some 1 day on their pay day. They will all be paid as we don’t take this lightly. They have been paid since the 16th, so we are not sure where that number is coming from. We do not work men 17 hours as stated. We work a very normal mining schedule. We value the employees greatly for their work and their future work. Given challenging markets, we are focused on ensuring the longevity of the employment for all the men and women of our organization."