Students restoring home to be used as Lucasville Historical Center 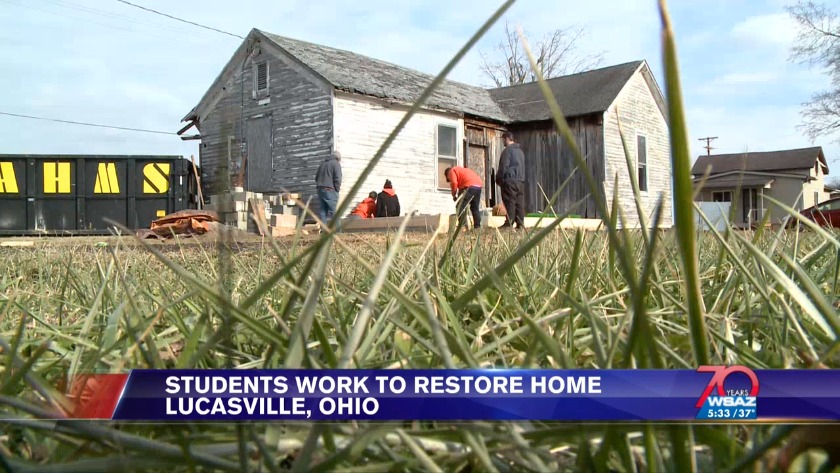 Students from the Scioto County Career and Technical Center are helping to turn an old home in Lucasville, Ohio into an historical center.

The home along West Street is more than 100 years old, built in 1910. The land was part of Thomas Farm, according to Linda Scott and John Smith with the Lucasville Area Historical Society.

She says the home became known as the 'Sullivan House' because that was the family that lived there the longest.

Over the years, the house became rundown and in need of restoration. Scott says she was worried because of the condition of the house that it may be in disrepair.

However, a contractor came in and said the home was still stable and could be restored.

Now, the plan is to use the building as the future site for the Lucasville Area Historical Society. They plan to use the home to house more than 400 archives from the community.

Students from the Scioto County Career and Technical Center are working on the home and started on the project about two weeks ago.

Smitty Ratcliff is among the group of juniors and seniors working to restore the home.

"Usually we will drive by places like this and think it's nothing special," Ratcliff said. "But now we get to bring it back to life and do something pretty good with it."

Scott says the best part about the project is the fact that the students are getting hands-on learning experience and are getting to learn about history at the same time.

"It's going to be wonderful to be able to bring in these things that belong to Lucasville, our history," Scott said. "These kids are learning from this. They are learning something about the history of a place."

This is the first project like this the students are participating in this year. Last year, they helped with the Greenlawn Cemetery.

"I'm hoping one day I will be able to drive by with hopefully a family and be able to say I built that," said Ratcliff.

In Lucasville, 2019 is the bicentennial year.

The hope is to have the work on the historical center finished by December of 2020. However, members of the historical society say that depends on two things: funding and weather.

The Scioto Foundation gave the group a grant to move forward with the building process.