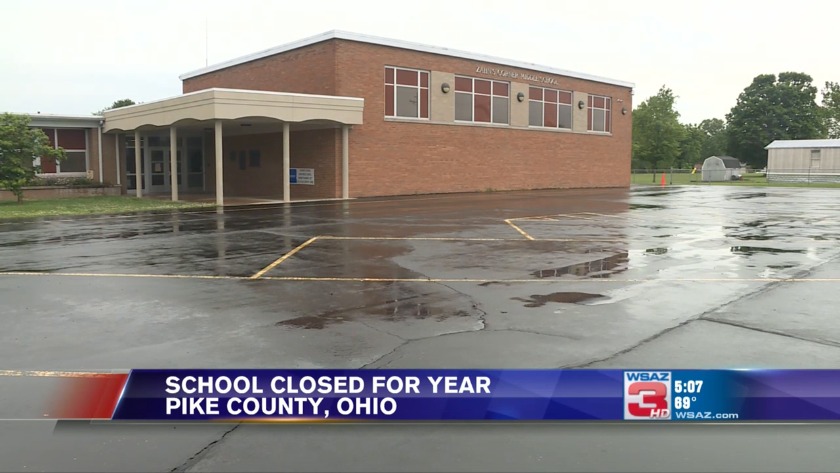 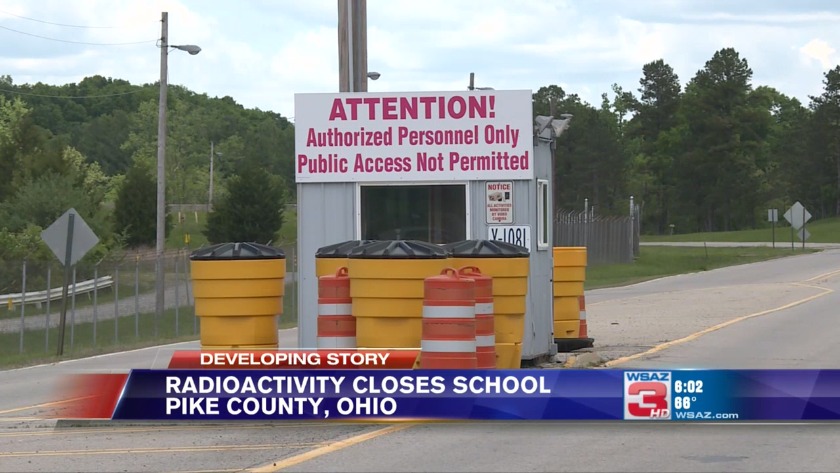 The Scioto Valley Local School District in Ohio decided to close Zahns Corner Middle School after enriched uranium was detected inside of it.

Scioto Valley Local School District had closed the Zahn's Corner Middle School in Piketon in mid-May after traces of radioactive material were discovered.

But the Department of Energy tells The Columbus Dispatch there is no public health risk from radioactive material at the school.

A university scientist who found some of the earlier traces questioned the department's testing methodology, which the DOE defends.

More tests are planned. The department and local health officials already had agreed to have independent, third-party testing at the school, which sits several miles from the former Portsmouth Gaseous Diffusion Plant.


UPDATE 5/29/19 @ 5:55 p.m.
Kids are not coming back to a school which got an early start to the summer break because of radioactive worries.

Third party testing has not even been done yet, but school officials in Pike County said they wanted to give parents certainty for the fall.

Making things more complicated, the main contact for the federal government working with the district and health officials no longer has that job.

School Board President Brandon Wooldridge tells us he has lost faith in the process.

It’s no surprise that all was quiet Wednesday afternoon at Zahn's Corner Middle School.

As we told you already, the building was shut down two weeks ago after air samples both inside and outside the school tested positive for radioactive materials, likely connected to the Portsmouth Gaseous Diffusion Plant 3 miles away.

Wooldridge and the other board members with the Scioto Valley Local School District decided last week the 6th grade will be at the high school this fall and 4th and 5th graders will be at Jasper Elementary.

"We want each parent to know we're taking every step to ensure everybody's safe and happy and ready for the school year," he said.

In a surprise move, the Department of Energy came over the holiday weekend to take samples in the school. They wanted to sample lockers and desks. Wooldridge insisted things like vents and ceiling tiles.

"Stuff that is not cleaned every week or every day."

Wooldridge said documentation that was promised on Sunday about what they tested for and where it will be analyzed hadn’t arrived when we spoke.

"It's frustrating. Makes you go back to the point where you don't trust them again," he said.

He finally got the notification just before 5 p.m. Wednesday that local officials had been provided the promised documentation.

Anne White, the head of the Department of Energy's Office of Environmental Management, agreed to third-party testing early this month. Multiple news sources report she was forced out less than two weeks later.

"She agreed to the third-party assessment."

Vina Colley worked at the plant in the early 80s. For decades she's been an activist about the radioactivity and its associated health dangers, including some of her health ailments she blames on her time there.

She’s the president of P.R.E.S.S., which stands for Portsmouth/Piketon Residents for Environmental Safety and Security, and is co-chair of the National Nuclear Workers for Justice.

When it comes to the results of Zahn’s Corner, she’s not surprised.

"I can't believe our government is doing that to our kids," Colley said. "To me, it's not really anything new. I'm concerned about the kids and that school."

With the strong wind again Wednesday at the school, she’s concerned about where dangerous microscopic particles could be continuing to go. She thinks schools and other facilities should be tested within a 10-mile radius.

"All the schools in that area around that plant need to be checked," she said.

She also wants to see a full investigation of the plant and its activities, as well as health monitoring of the residents -- with particular attention paid to any clusters of disease.

Wooldridge said he won’t trust the results of the recent government sampling.

That’s why he said testing from an independent third party is a “must,” though it isn’t easy because so many businesses have connections and contracts with the Department of Energy.

Wooldridge said a committee of people hopes to have the independent third party selected by the end of this week.

As for the other issues with the Department of Energy, he hopes the governor's office can help address them all.


UPDATE 5/27/19 @ 3:45 p.m.
An Ohio school district that closed a building where radioactive contamination was found says classes will be moved elsewhere at the start of next school year.


UPDATE 5/14/19 @ 6:03 p.m.
Summer break began Tuesday for students at Zahn’s Corner Middle School in Pike County, as school officials wrestled with test results which detected radioactive substances both outside and inside the building.

Superintendent Todd Burkitt tells us he’s frustrated he wasn’t alerted about the problem for more than a year. At this time, he’s not sure if the building can reopen in the fall.

Meanwhile, the work to dispose of nuclear waste about 3 miles away is not stopping.

The American flag waved in the breeze outside the school. But there's no students or staff inside until further notice.

The reason is that prevailing wind, just 3 miles as the crow flies from the Portsmouth Gaseous Diffusion Plant which enriched uranium for the federal government until 2001.

An air monitoring station across the street from the school detecting neptunium in 2017. But Burkitt didn't find out until March 2019.

"A little upset, to be honest," he said.

He adds very little is known beyond that, including how often the station is monitored or if there’s been more positive tests since 2017.

That positive test led a community member to pay for an independent evaluation inside the school where both swabs tested positive for enriched uranium. He hopes staff and kids weren't in danger.

"My hope is that the levels were low, but until we get results, I don't know that anyone can answer that," Burkitt said.

Lena Blanton lives a short distance away from Zahn’s Corner Middle School, part of the Scioto Valley Local School District. Her 8-month-old granddaughter sat on her knee as she spoke with WSAZ's Dan Klein.

"This is my life right here,” pointing at the baby. “This is what makes me go on."

Blanton's youngest daughter just finished at Zahn’s Corner last year, the third of her children to go to middle school there.

She lives in view of the yellow school crossing sign and thinks the building may need a new warning out front after the air quality test.

She's glad school was canceled, but also worries about living so close.

"If I could, I would move away, go down south," Blanton said.

Burkitt said the building will remain closed until an independent third party can verify the school is safe, with the testing cost paid for by the Department of Energy. But that decision could takes weeks or even months.

Students at Zahn's Corner have already met the state-minimum for classroom time, so they don't need to go back.

Meanwhile, the Pike County General Health District released a statement Tuesday. It said the Department of Energy disclosed Monday, while no neptunium was detected in 2018 at the air monitoring station by the school, there was another radioactive isotope called Americium-241.

Officials with the Department of Energy said the work to dispose of the radioactive material will not stop until they have more data.


UPDATE 5/13/19 @ 6:40 p.m.
A middle school has closed its doors after radioactive materials have been detected inside and outside of the school.

The Scioto Valley Local School District decided to close Zahns Corner Middle School after enriched uranium was detected inside of it.

This comes less than three weeks after another radioactive material, Neptunium 237, was detected by a U.S. Department of Energy air monitor located near the middle school.

In a letter to parents and staff, the Scioto Valley Local School District states that the middle school will remain closed "until the source, extent, level of contamination, and potential impacts to public health and the environment can be determined."

The letter also states that the enriched uranium and Neptunium are "contaminants of concern by the U.S. Department of Energy on the Portsmouth Gaseous Diffusion Plant property" which is located near the middle school.

The Scioto Valley Local Schools District says it worked with the Pike County Health Department to make this decision.

School officials say they believe it is in the student's best interest to close the school for the remainder of the year.

The air monitor is across the street from Zahn's Corner Middle School in Pike County.

"It's a very scary thing, I've asked many many questions, I've taken part in public comment --any forum that I can for the safety of my family and my community," said concerned parent, Elizabeth Lamerson.

The Pike County General Health District says due to Department of Energy documents, Neptunium is on the Portsmouth reservation and has reached the air monitoring station as a likely result of construction activities on the On-Site Waste Disposal Facility.

"On site waste disposal site you have construction, you've already said there's neptunium 237 on this property..now you've dozed and excavated the whole property. Neptunium shows up in an air monitor...where's it probably coming from," said Health Commissioner, Matt Brewster.

The Pike County General health District says right now it's too early to know the health impacts of contamination.

But the Health District is asking state and federal partners to assist them with stopping any further construction on the On-Site Waste Disposal Facility and move forward with a full investigation of off site contamination. They say they want this done until it is determined that harmful contamination will not reach their citizens.