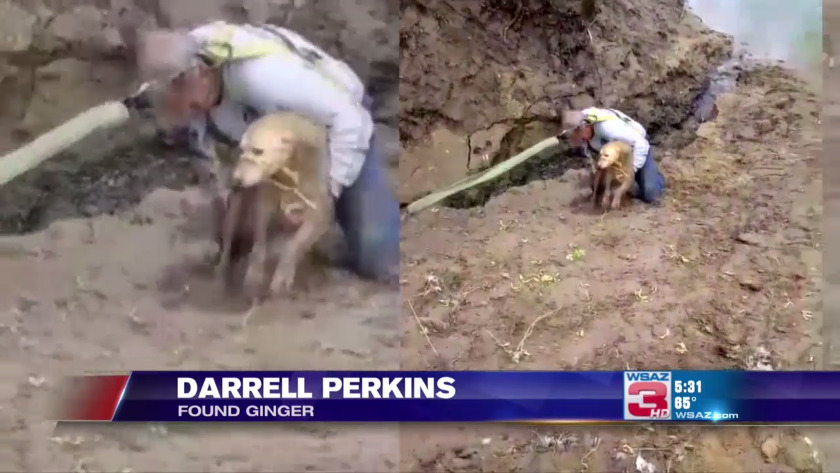 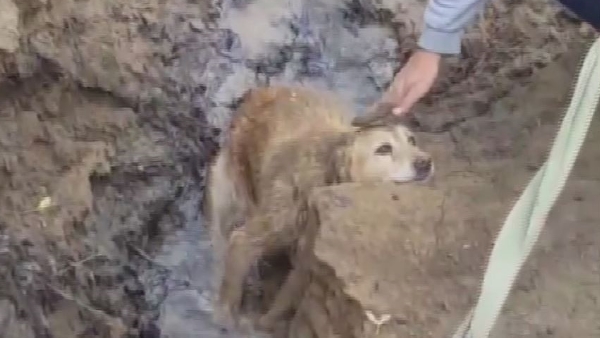 LAWRENCE COUNTY, Ky. (WSAZ) -- UPDATE 4/26/18 @ 6:11 p.m.
A dog that had been missing for several days howled at just the right time Wednesday morning. But rescuers tell us it was a rescue that’s miraculous in more ways than one.

Her name is Ginger. She’s a stray adopted 12 years ago by Brenda Osborne, who lives in the Ulysses area of Lawrence County near the Martin County line.

She and her husband gave Ginger and their other three dogs a treat Friday morning before heading out of town for the weekend.

When they got back Sunday night, they realized she was gone. But it wasn't until Monday morning when she still was missing, they got worried.

They did everything they could, calling the neighbors and going up and down the Levisa Fork near their home. Among the searchers was Osborne’s next-door neighbor and brother Darrell Perkins.

"She's the neighborhood dog; everybody loves her," Perkins said.

But they heard nothing. In fact, they thought she either was picked up by a stranger or wandered off somewhere and died.

"She wasn't making any noise at all,” Perkins said. “We didn't think she'd be down here."

But fast forward to Wednesday morning when Perkins heard howling down by the river at the exact right time, just as he was getting into his truck. He followed the noise until he found Ginger.

"Once she saw me, she was fine,” Perkins said. “Then I sort of panicked. I knew I had to get her out of there."

He then made some frantic calls, eventually reaching Lawrence County Dog Warden Johnny Rickman, the man in the video, who used Perkins' harness because the bank was way too steep.

Osborne said she couldn't believe it when she got the call from her brother.

"When he says, 'Brenda I found Ginger,' I still thought somebody had happened to her till he says 'And she's alive, found her on the riverbank.' I just couldn't believe it. I could get nothing done at work, believe me."

Osborne adopted Ginger when she was a stray puppy back in 2006 and only a few months old.

"She's like one of the grandkids I guess you'd say," she said.

Rickman said he was just doing his job.

"I didn't think, I just put the harness on and went down and got her."

No one knows how Ginger got there.

Perkins think she fell down the bank, perhaps Saturday, hurt her leg and has been stuck ever since.

As of Thursday afternoon, she's at the vet. She’s taken some food and water, but too weak for a bath or X-rays.

"Yeah it's a miracle we got out in time," Rickman said.

As for the video itself, Perkins said he just took it to show his sister where Ginger was, never thinking it would blow up on Facebook with more than 18,000 views as of Thursday evening.


ORIGINAL STORY 4/26/18
Cell phone video captures a long-awaited and touching moment: A group of men rescuing a pet dog that was stuck in a river in Lawrence County, Kentucky.

Darrell Perkins tells WSAZ that his sister and brother-in-law who live next door to him lost their dog Ginger. They live in Levisa Fork near the Martin County line.

The dog had been missing since Friday and the family was assuming the worst. However, Wednesday morning Perkins heard a howling sound.

He says it sounded like the howling was coming from the other side of the river. Perkins' mind immediately went to Ginger.

While walking down the river bank to investigate, Perkins found Ginger stuck in the mud and the creek water. He believes she has been stuck there since she went missing Friday.

"I'm thankful that the river hadn't raised a couple feet or she would have drowned," said Perkins. "I didn't know what to do."

Perkins decided to call his neighbor, Mitchell McCoy, and the Lawrence County dog warden, Johnny Rickman who arrived right away.

The video shows Rickman tethered for safety, inching down the slope to reach the pup.

"I could not have rescued the dog by myself," said Perkins. "The hill was too steep and muddy and right against the river."

The men rescued Ginger and took her to the Tri-County Animal Clinic.