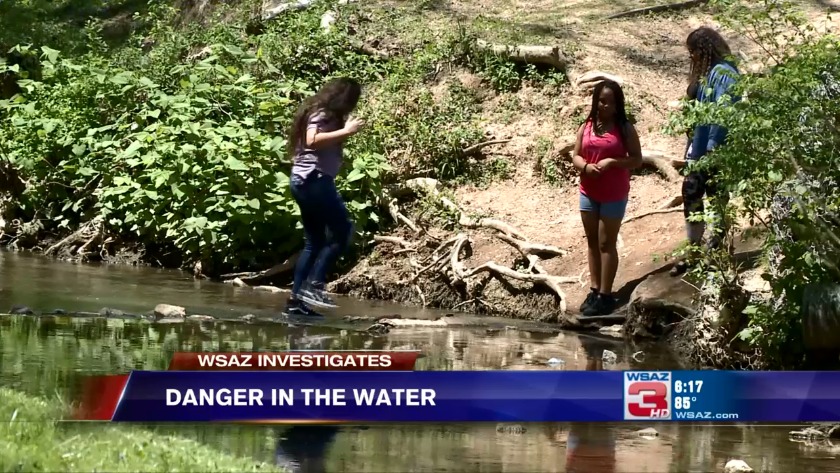 WSAZ Investigates: Danger in the Water

WSAZ Investigates: Danger in the Water

HUNTINGTON/CHARLESTON, W.Va. (WSAZ) -- UPDATE 5/3/18 @ 10:50 p.m.
In February, we took you to creeks where our children play. Experts tested the water and some of the results were alarming.

As the weather heats up, more kids are getting in the water. We tested the water for you again, bringing in a professional with ALS Global to test for both E. coli and fecal coliform -- two types of bacteria commonly found in streams that could make your kids sick.

Our crew traveled throughout the region and made stops at Davis Creek in the Kanawha State Forest and Ridenour Lake in Nitro. We also visited Fourpole Creek in Huntington's Ritter Park.

We compared our results to the West Virginia Department of Environmental Protections standards.

Their maximum allowable level of fecal coliform to keep your family safe is 200 colonies per 100 milliliters.

Our newest results from Fourpole Creek revealed a level of fecal coliform 10 times the DEP’s standard -- higher than our results in February and more than double the results we found last July.

That's 2000 colonies per 100 mL of fecal coliform. The level of E. coli was lower however the DEP does not test for E. coli specifically so there is no comparison.

Our results were shocking to parents.

“Now it makes you think,” Amanda Smith said. “I wouldn’t let my kids play in it.”

However, it doesn’t take Andy Johnson, Vice Chairman of the Fourpole Creek Watershed Association, by surprise.

“This is just proof again that we have issues,” Johnson said. “Despite knowing about these issues for a long time and trying to deal with them. It’s a legacy problem.”

The results were also below the standard at Davis Creek, both in February and April, with the amounts fecal coliform below 10 colonies per 100 mL.

Doctors say the bacteria could have harmful effects on your kids’ health, from diarrhea to hospitalization in severe cases.

As for the bacteria plaguing Fourpole Creek, Johnson says the root of the problem is clear.

“It’s been listed as impaired for fecal bacteria, biological impairment, sedimentation, aluminum, all these issues but the one thing that brings them all together is storm water so if we could solve Huntington’s and four pole creek's storm water issue then we could go towards addressing each one of those other concerns,” Johnson said.

Johnson says storm water and failing septic systems are to blame, citing a 2002 study by the Environmental Protection Agency.

“Failing septic systems cause issues during low flow periods so in the late summer when the stream is low, you've got failing septic tanks and failing septic systems that will leach fecal coliforms into the streams,” Johnson said. “But in high flow times when you've got big large rain events in the winter or the spring, when you see those large rain events we also have problems and its coming from Huntington which is a big source of fecal bacteria which gets flushed into our storm drainage system and out through the creek.”

The watershed association has projects they’re working on to address storm water concerns.

“We've planted a lot of dogwoods, we got a grant to plant dogwoods,” Johnson said. “Those trees will hopefully grow up, create little umbrellas, and create absorption in the soil to absorb water so that it doesn't flush directly into the creek.”

They’re also starting a rain barrel program for anyone to purchase as a benefit to the creek and homeowners.

Johnson says there are steps homeowners can take every day to proactively protect the creek.

“Being conscience of what you're putting down in the storm drains, what you’re blowing into the streets, what you’re doing with your leave,” Johnson said. “That’s a big responsibility for homeowners that live around in this watershed.”

For more information about the programs and projects, you can join the Fourpole Creek Watershed Association’s group on Facebook.


ORIGINAL STORY 2/1/18
While creeks may be beautiful spots across our region for kids to play, they can be full of hidden dangers.

In a story we've been tracking since July, we had experts test the water in creeks. What they found was alarming.

"Be honest with you, it'd almost be like letting them play in a sewer plant," Paul Painter with ALS Global said. "That's how bad it is."

We show what you can do to protect your family, including bringing in a professional with ALS Global to test for both E. coli and fecal coliform -- two types of bacteria commonly found in streams that could make your kids sick.

Our crew traveled throughout the region and made stops at Davis Creek in the Kanawha State Forest and Ridenour Lake in Nitro. We also visited Four Pole Creek in Huntington's Ritter Park – a place where Brittany Podmanik’s kids love to play.

We compared our results to the West Virginia Department of Environmental Protections standards.

Their maximum allowable level of fecal coliform to keep your family safe is 200 colonies per 100 milliliters.

Our results from the summer for Four Pole Creek were alarming, with the amount of fecal coliform more than four times the DEP’s standards.

When we tested again, our results for winter were even worse -- skyrocketing to more than nine times the standard set by the DEP. Water that could make your kids very sick.

The DEP tests every five years, and they take at least five samples at every test. A spokesperson says several samples need to be taken in one month to properly assess the water.

Andy Johnson, president of the Four Pole Creek Watershed Association, says they've always been concerned about the pollution of Four Pole Creek and that it's not too surprising.

Painter says the constant activity surrounding Ritter Park and the stagnant water will contribute to the bacteria.

Both Johnson and Painter also point out runoff from the dog park.

Wes Leek, director of the Huntington Sanitary Board, says the combined sewer overflow contamination used to be an issue for Four Pole Creek but they have since capped those lines.

Stormwater Director Sherry Wilkins says Four Pole Creek extends for 23 sq. miles and there are several places that extend out of the city of Huntington. She says there is also pollution coming from some rural areas, farm animals and failing septic systems.

It's still unclear when the DEP last tested Four Pole Creek along with the other locations.

Doctors say the bacteria could have harmful effects on your kids’ health -- from diarrhea to, in severe cases, hospitalization. They recommend just avoiding it all together.

But when we went 40 miles down the road, we found results well below the DEP’s standard at popular fishing spot Ridenour Lake.

"It's nothing that really concerns me, nothing that would really bother me or make me run away," Painter said.

The results were even lower this winter with the amounts of E. coli and fecal coliform, both below 10 colonies per 100 mL.

As for Brittany Podmanik, who admitted that she enjoyed playing in creeks as a kid, she hopes to see signs in the future -- warning parents and kids. She said she also would like to see an effort to address the danger in the water.

In the meantime, she said she’ll be keeping a watchful eye on her two kids.

“Now I’m going to question whether or not it's really safe because that's astonishing, that's crazy,” she said of the results we found.

The DEP doesn’t have specific numbers for E. coli because a spokesperson says it’s calculated as a subset of fecal coliform.

In a statement, Johnson said, "The Fourpole Creek Watershed Association works with WV DEP, local schools, and Marshall University for the assessment and betterment of water quality in the watershed. The findings from WSAZ are not surprising and show that we still have a lot of work to do to make Fourpole Creek cleaner and safer. If anyone is interested in joining the group, meetings are held at 6:30 pm on the second Tuesday of each month at the OVEC building, 14th St West in Huntington."