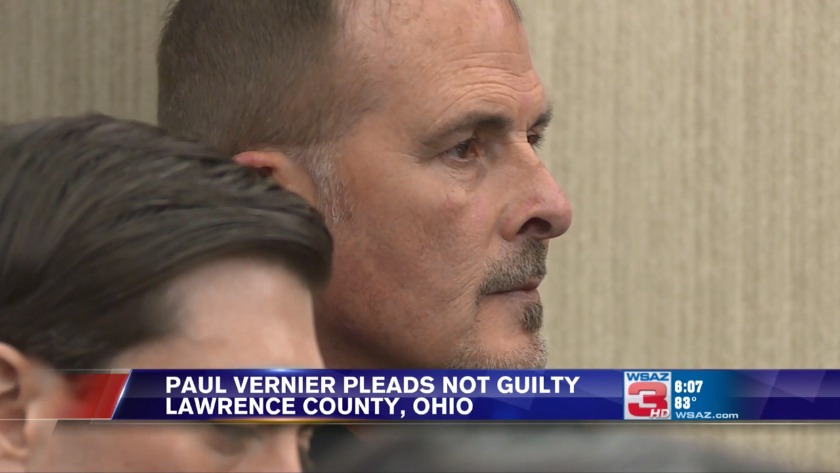 LAWRENCE COUNTY, Ohio (WSAZ) -- UPDATE 4/18/19 @ 1:55 p.m.
The former owner of three addiction treatment centers in southern Ohio pleaded not guilty Thursday to all 34 felony charges against him, our crew at the scene reports.

Among the charges Paul Vernier faces are Medicaid fraud, drug trafficking and engaging in a pattern of corrupt activity.

During raids in 2014, local and federal officials executed search warrants at Community Counseling Treatment Services Center in Ironton, as well as their two facilities in Portsmouth and at Vernier's home.

Common Pleas Judge Christen Finley released Vernier on his own recognizance but ordered electronic monitoring and for him to stay within 100 miles.

Vernier also must give up his passport. Prosecutors with the state attorney general's office say they do not believe he is a flight risk.

Vernier's attorney Matthew Wiscup adamantly denies the allegations and told WSAZ's Dan Klein that it's their intention "to vehemently defend the charges in court."


UPDATE 3/27/19 @ 3:50 p.m.
The owner of three former addiction treatment centers in southern Ohio has been indicted on 34 felony charges, according to Ohio Attorney General Dave Yost.

Among the charges Paul Vernier faces are Medicaid fraud, drug trafficking and engaging in a pattern of corrupt activity.

Investigators with the Ohio Attorney General's Office confirm the charges are conducted with raids we covered in 2014. At that time, many of the nearly 1,200 patients came to the defense of Vernier and his staff. During those raids, local and federal officials executed search warrants at Community Counseling Treatment Services Center in Ironton, as well as their two facilities in Portsmouth and at Vernier's home.

Local and federal officials executed search warrants at Community Counseling Treatment Services Center in Ironton, Ohio, as well as their two facilities in Portsmouth and the owner's home.

Filed Wednesday in Lawrence County Court of Common Pleas, the indictment accuses Vernier of overbilling for Medicaid services and illegally operating a dispensary for the addiction treatment drug Suboxone.

Investigators say Vernier ran two facilities in Portsmouth and another in Ironton, all under the name Community Counseling and Treatment Services. All three facilities have since closed.

Investigators say they uncovered evidence that Vernier dispensed Suboxone at his Ironton facility without authorization from a physician. He also allegedly overbilled the Ohio Department of Medicaid for group counseling services and claimed reimbursement for services that lacked supporting documentation.

“The evidence will show that this guy abused the trust of hurting people who were looking for help and that he played the rest of us – who pay the bills – for fools,” Yost said in a news release. “Time for some accountability.”

The indictment is the culmination of a multi-agency investigation by Yost’s Special Prosecutions Section and Medicaid Fraud Control Unit, the U.S. Drug Enforcement Administration, the State of Ohio Board of Pharmacy and the State Medical Board.

The charges against Vernier include:

The attorney general’s office is prosecuting the case.


UPDATE 10/1/14 @ 9 p.m.
It's been a week since investigators raided Community Counseling and Treatment Services in Ironton and Portsmouth.

Many of the estimated 1,200 patients have been coming to the defense of the accused owner and staff.

"I've been a struggling addict since 16 years old, in and out of trouble," Siders said. "It wasn't so much the medicines I was getting, but everything. The counseling, they do as much as they can to get to the bottom of your addiction."

He and other patients were stunned after it was shut down last Thursday, amidst accusations the owner and staff took part in Medicaid fraud, money laundering and drug trafficking.

“It hurts me, not just losing the medicine, but you lose all the people that you have, all the work you've put into everything out there," Siders said.

Joanna Krohn is the founder of the Solace group in Portsmouth that fights the region's drug epidemic.

She says it's been a hectic week, working with former patients trying to figure out where to go from here.

"They've kind of had the rug pulled out from under them," she said.

Suboxone is part of the treatment for many of those patients. Now they're running out.

"We've been bombarded with phone calls, people not knowing where to go, how to get help," Krohn said.

Krohn lost one of her sons to drugs. She says her other son, who’s also battled addiction, has been helped tremendously by the center facing these accusations.

"(He’s a) completely different person,” Krohn said. “I heard him laugh out loud for the first time in 15 years. That brought me to tears. I'm concerned for him. I'm concerned with everyone who's struggling with support systems now."

The volunteers at Solace have been trying to place recovering addicts into other treatment programs, but that's been tricky, because they say the waiting lists at other local treatment facilities are backed up.

Local and federal officials executed search warrants at Community Counseling Treatment Services Center in Ironton, Ohio, as well as their two facilities in Portsmouth and the owner's home.

Investigators searched the clinics in Portsmouth and Ironton, both by the same man, Paul Vernier, 52.

They're looking for evidence in a drug trafficking and money laundering case they said has been in the works for more than a year.

"It's what happens in a facility like this," said one employee, who wouldn't tell WSAZ.com his name.

Neighbors said they weren't surprised by the raid. "This place is killing our kids and grandkids, and when I saw that on the news, I was so happy, I said thank you Lord Jesus, for stopping people like this," said Sandy Cooper, a neighbor.

Federal and state investigators are looking into the clinic's practices at locations in Scioto and Lawrence counties in Ohio.

They said the owner of all the clinics, Vernier, and his staff took part in illegal activity including drug trafficking, money laundering, insurance fraud and forging prescriptions.

"This parking lot's plum full and people are waiting in lines to get in," said Scioto County Sheriff Marty Donini.

"I think when money gets involved, you start not following the laws and rules and it catches up with you and I believe that's the situation we have here," said Lawrence County Sheriff Jeff Lawless.

Patients were shocked when they pulled up to the Ironton clinic only to find the feds instead.

"It's very surprising to me," said one patient.

"It's helped me get my life back together, now I'm able to work, I'm able, I have money, I have money in my pocket now," said another patient.

For now, investigators said Vernier hasn't been charged or arrested.

But some people said it's time to crack down on counseling centers, just like pill mills.

"I lost a son ten years ago on drugs, I've got two grandsons that's on drugs, and I'll do anything in this world to stop it," Cooper said.

WSAZ.com also went to the owner, Paul Vernier's home, looking to get his side of the story. Unfortunately, when we got there, investigators said he left.

We will continue to reach out to him.

Police said Medicaid practices at the facilities will end, but other than that, the centers can remain open and run business as usual.

This is not the first time WSAZ.com has covered the Community Counseling Treatment Center, or Paul Vernier.

Back in 2012, we talked with Vernier when he opened his facility in Ironton.

It was a former pill mill he claimed to be transforming into a place where addicts could get clean.

Vernier admitted he was an addicted for 25 years and said he wanted to open the facilities to help others.

A law passed in Ohio to help crack down on pill mills has helped, but investigators said it does not give them the teeth they need to fight illegal drug activity at places like treatment facilities.

House Bill 93 created stricter reporting requirements by doctors who prescribe drugs, it cleared up the definition of pain clinic and limits the amount of prescription drug doctors can dispense.

It also defines who can work at a pain clinic.

What House Bill 93 does not do: define who can work at these drug treatment facilities.

That is why Vernier is able to legally own three of these "counseling" locations.

Keep clicking on WSAZ.com for more on this developing story.

Police say the warrants stem from a joint investigation launched by the Ohio State Board of Pharmacy, Columbus DEA Tactical Diversion Squad and Ohio Health Care Fraud Unit in 2013.

Police say the investigation involves accusations of Vernier and his staff engaging in a pattern of corrupt activity, fraud and trafficking in prescription drugs.

The alleged activity included over-billing Ohio Medicaid and submitting claims for treatments that never occurred, and forging prescriptions which were illegally presented to patients.

We have crews at both scenes.

Keep clicking on WSAZ.com for the latest information.