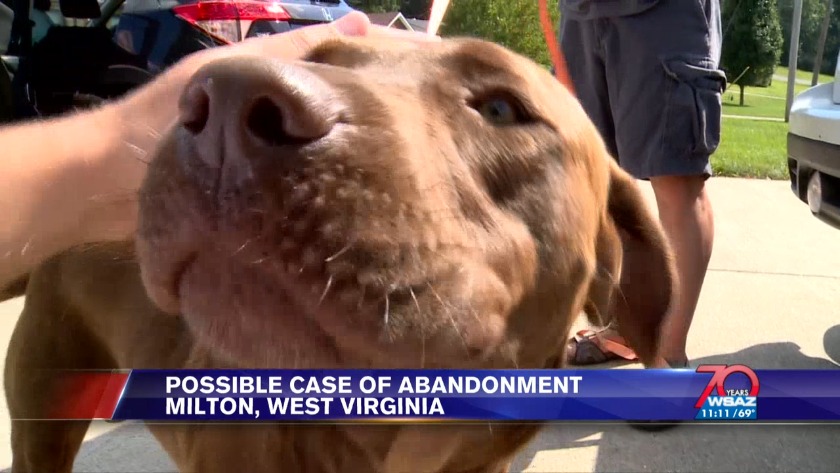 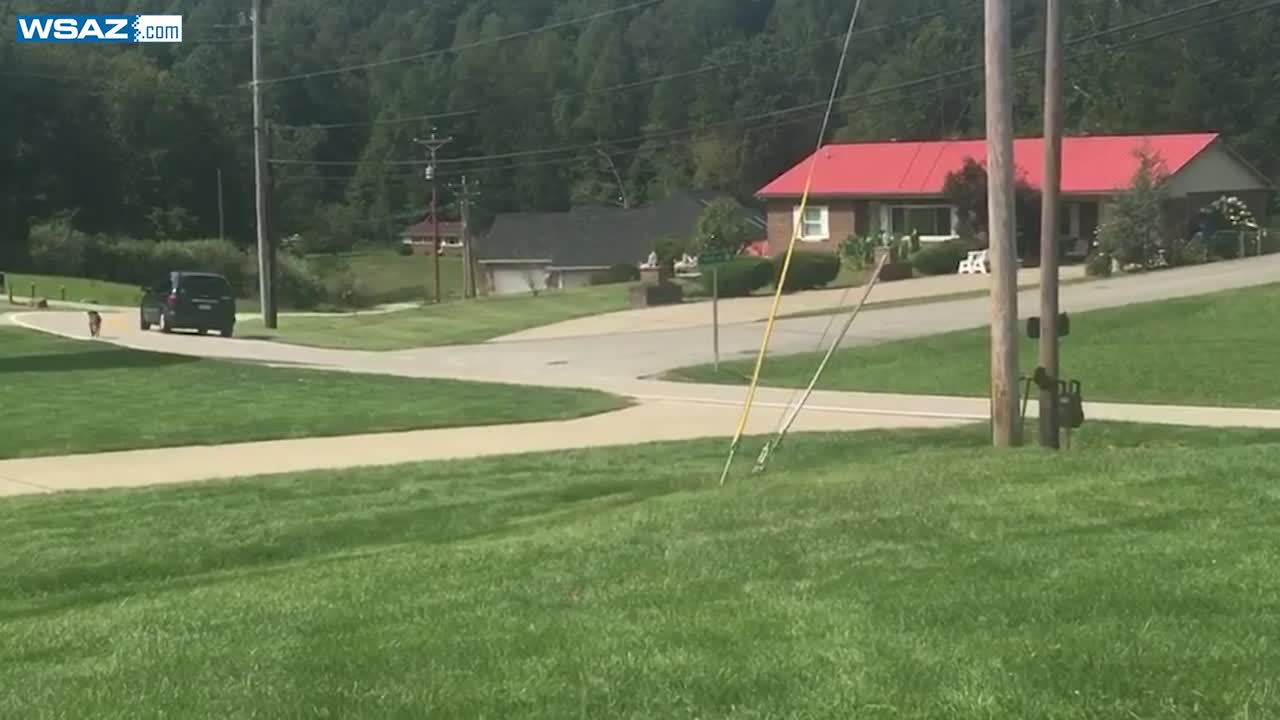 A volunteer with One by One Animal Advocates helped search Monday afternoon, and eventually found the chocolate Lab not far from where the video was taken. (Source: WSAZ)

The video has been watched close to 150,000 times as of Monday evening.

The video appears to show someone dropping off a dog in a neighborhood and driving off. The dog can be seen running after the van.

"I just don't know how anybody could do that," Edmonds said.

Stephanie Elswick, a volunteer rescue worker, says the video troubled her so much, she had trouble sleeping.

She drove early Monday morning from her home in Barboursville and looked for the dog. She says at first she didn't have any luck, but then she went back Monday afternoon and spotted him.

"It was a needle in a haystack, and I got really lucky," she said.

Elswick says she saw the chocolate lab tied up in a neighbor's yard about a mile from where he'd been left.

"I asked if it was their dog," she said. "They said no. They'd found him in the road and tied him up to keep him safe."

The lab appears healthy and friendly, making it all the more perplexing why somebody would abandon him.

"Just don't throw them out in the road like this to fend for themselves," Elswick said.

"Hopefully the people are at least confronted and talked to and realize what they did was wrong," Edmonds said.

Elswick took him to Huntington Animal Control. Several have already expressed interest in adopting him.

The license plate on that van is blurry in the video. The van has a missing hub cap. Animal control officers are hoping somebody can identify the van for them.

If you have any information about the driver in the video or this case, call animal control at (304) 696-5551. You can also message the animal shelter's Facebook page and ask for Mr. Rutherford. He says all information will be kept private.

A man called WSAZ Monday evening claiming his girlfriend was the one driving that van. He says that dog had followed her home, and she was merely trying to return the dog to where he had begun to follow her. The boyfriend says they haven't been able to get in touch with animial control yet.


ORIGINAL STORY
Animal control officials are searching for a driver who seemingly abandoned a dog in a Milton neighborhood.

Cell phone video taken by a neighbor first shows the dog walking next to a van. The video never shows the dog leaving the vehicle. The van then drives off and the dog runs after it all the way down the road until the vehicle is out of view.

The man who filmed the incident tells WSAZ the van was at the intersection of East Mud River Road and Lakeside Avenue.

The man who recorded the video says it happened Sunday morning. He did not recognize the vehicle, but he says it was missing a hubcap on the front driver's side wheel. It also has a sticker on the back windshield.

Huntington Cabell Wayne Animal Control has an open investigation and is looking to speak with the driver.

That neighbor posted the video on Facebook. It has been shared more than 3,300 times. He tells WSAZ he was amazed by the response on social media and how the community pulled together to help find the dog.

The dog ran off after the incident, according to the neighbor. A volunteer with One by One Animal Advocates helped search Monday afternoon, and eventually found the chocolate Lab not far from where the video was taken. A family down the road found the dog and was looking after it.

Humane Officer Jon Rutherford tells WSAZ the dog is now safe at the Huntington Cabell Wayne Animal Shelter. He describes the Lab as being "very sweet." The dog did not have a collar.

If you have any information about the driver in the video or this case, call animal control at (304) 696-5551. You can also message the animal shelter's Facebook page and ask for Rutherford. He says all information will be kept private.